Mix Number 11 in the Sinchi & Friends series is @cabaretnocturne . We’ve been huge fans of his music for some time, so we’re excited to have him involved in the series. What we’ve learnt though, is he’s not just a talented DJ and producer but a bit of a legend of the Belgian scene! So take a listen, read below and get to know the awesome Raphael / Cabaret Nocturne.

1)Who are you?
My name is Raphael and I live in the country of the new beat. This musical universe has fascinated me since a very young age. I remember at the age of 10, I hid under my bed with my radio ghetto blaster listening to independent broadcasts late into the night. At 12, I started to buy my first vinyl (I have more than 10,000 today) and organized very quickly my first parties in the basement of a friend. It was amazing! We did most of our first night owls experiences … One thing leading to another, from the mid-90s, I organized / co-organized parties in many Belgian clubs (Fuse, Café d’Anvers, Culture Club, Who’s Who’s Land …) with some artists such as Andrew Weatherall, Damian Lazarus, Juan Atkins, DJ Hell, Mandy, D’Julz, MyMy … I also founded and directed the ‘Digitalk FM’ radio show. Our goal was to highlight the Belgian electronic scene by inviting promising DJs and producers as well for interviews, as dj sets or lives. In 8 years we have had the pleasure of welcome incredibly guests that are better know today under their names as Mugwump, The Magician, Aeroplane … At the same time, the need to produce has naturally manifested and great guys like Eric Beysens (formerly resident of Bocaccio), Kolombo or Jean Vanesse (Spirit Catcher) have greatly helped me in the quest for this learning. After some testing and 10 good years, I finally decided to start my own project Cabaret Nocturne.

2)How would you describe your sound?
Early I was fascinated by Italo-disco, new wave and new-beat but my standards are non-formulaic. DJ Mag described my sound as fusions of ’80s pop, dark basslines, house beats and unhinged since the mid-noughties but in my case I did not want my music to be identified with a style. What matters to me is to share an emotion.

3)What are your plans for 2016?
This year has already started well with the release of my ‘Blood Walk’ EP on Beachcoma – the label founded by Fairmont, Sid Le Rock and Metope. I have a big respect for these 3 guys! They have an incredible talent and are very professional. Last month, Rotten City has also released a remix by Jonathan Kusuma of my track “Blind Trust” released last November. Mid-May, I get out a new EP on the Spanish label Factor City. Undo (FC owner) and Heretic were asked to reinterpret the original tracks. I am very excited by this release and really looking forward to explore the public’s feedback. In the coming months will follow another EP on the English label Nein and several remixes.

4)Which track in the mix is your favourite right now?

Underworld ‘If Rah’ (Matthew Herbert Remix). The original is excellent but the reinterpretation of Matthew Herbert’s is wonderful. I think this track will be timeless. It has neither time nor accurate style. This artist continues to surprise me. He is a visionary who has once again demonstrated the full extent of his talent.

Flesh by A Split Second, came out in ’86. Once played in 33+ 8 it become one of the greatest new beat hymns! My 12 “was very worn, so I was very happy to find the original edition.

6)What is your favourite track of the last 12 months? (Include both one of your own and somebody else’s)

I am torn between Blood Walk on Beachcoma and Blind Trust on Rotten City but for its history during the composition process, I will remember Blind Trust.

Regarding the track of somebody else, it would be Market of BSE. Discreetly released on the German label Bureau B, this track has to be known.

(very) late nights – hence the name of my project. I love this mystical and timeless energy that emerges later in the night when the world is idling.

It would not be a secret if I answer your question …

My Jupiter 8, a faithful friend who never fails me. 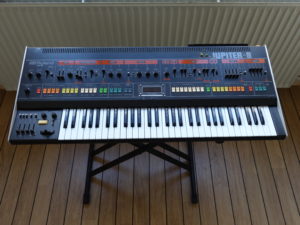 To be honest, I have no specific idea but I sincerely hope that there are always channels (and media) for artists to share their musical experimentations / innovations without any commercial censorship. Today the music business tends to brainwash the younger generations, to format the music. It is therefore essential to defend our history and our identity!

11) Where / Is there a line between creativity and insanity?

I do not think there is a separate line. The creativity and the insane are inseparable for me – one cannot exist without the other.

I am interested in all forms of art. The objective is the same as the music, only the tool is different. Moreover, many artists collaborate directly or indirectly in Cabaret Nocturne project. Chanic (a Brussels illustrator) creates the covers of my monthly podcasts K7 Nocturne.

The emotions. Whether positive or negative, they seem to me essential in the creative process. However, it is not always easy to deal with his emotions and to express the desired message.

14) How would your music be perceived a century in the future?

As a good space and timeless trip 🙂

Simply life experience … but without my wife and my son, it wouldn’t be ultimate!